The next stop on my solo travels around random places took me to Sri Lanka to catch up with friends as it’s been 2 years since I was last there.

I arrived early in the morning and managed to check in to my hotel early which allowed me to sleep for a few hours before doing chores like washing and painting my nails!

That evening I met with my travel buddy Diana who I hadn’t seen since we went to Singapore for New Year 2017/2018.

We sat on the rooftop of my hotel and had a drink and a bite to eat whilst catching up. We also planned our travels for the next few days. It was a national holiday in Sri Lanka so she had a few days spare to spend with me. We decided to travel up country to visit the amazing temples at Anuradhapura before heading to her family’s home of Jaffna in the far north.

Diana headed off early as we were getting an early bus at 6.30am.

So next morning I was up early, checked out and got an Uber to Diana’s house so that I could drop my rucksack off at hers and just travel with a small bag for a few days.

We got the Uber driver to drop us at the bus station which is always chaotic. There seems to be a total lack of organisation around which buses go from where and when.

Diana was convinced we would be on an air conditioned bus as she didn’t want to get the non AC option. Eventually we located a bus going to Anuradhapura and jumped on. We were the first people on the bus so we took a seat and enjoyed the extremely loud and violent film being shown on the tv at the front and sat there inhaling thick incense smoke! Eventually the bus started filling up and we were on our way, Diana suddenly noticing the lack of AC in the bus and the fully opening windows! Turned out we were on the non AC, for 5 hours…what an adventure! 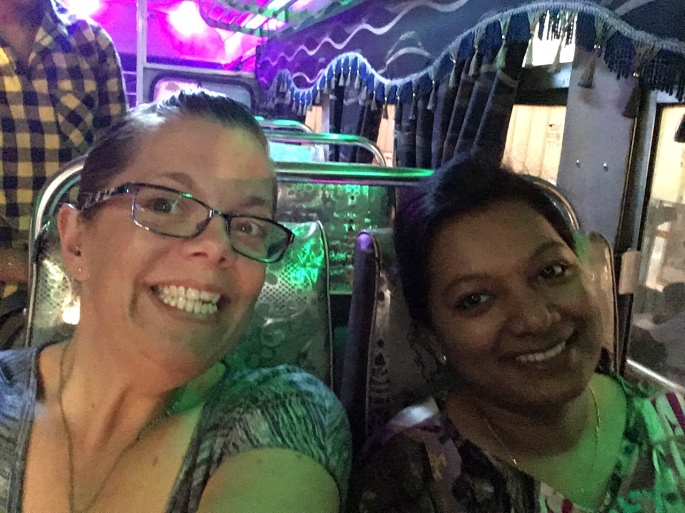 The bus, once out of Colombo, picked up speed and we were soon whizzing through the Sri Lankan countryside at a rapid pace. The 5 hours passed in a daze of napping, stopping for people to jump on and off, watching the dreadful film and being offered various food and drink items by vendors who leapt on and off the bus at intervals.

Eventually the bus rolled into Anuradhapura and we jumped off before the bus station and grabbed a tuktuk to the local hotel we had booked.

We arrived late morning/lunchtime and after a quick rest at the hotel we jumped back in the same tuktuk and the driver then took us around all the temples of Anuradhapura in one afternoon! It was the most fast paced buddhist pilgrimage ever! The driver said to get round all the temples and sights takes about 5-6 hours…we started at 1.30pm!

So first off he dropped us at Ruwanwelisaya Dagaba which dates to 140BC, it’s a huge white stupa with lovely Buddha statues surrounding it. So we removed our shoes and part walked, part ran between shaded spots on the floor to complete a circumambulation clockwise around the stupa.

The ground was bloody scalding….like walking on hot coals! I am not sure how holy my circumambulation was when I was muttering expletives under my breath as layers of skin were being burnt off the soles of my feet! 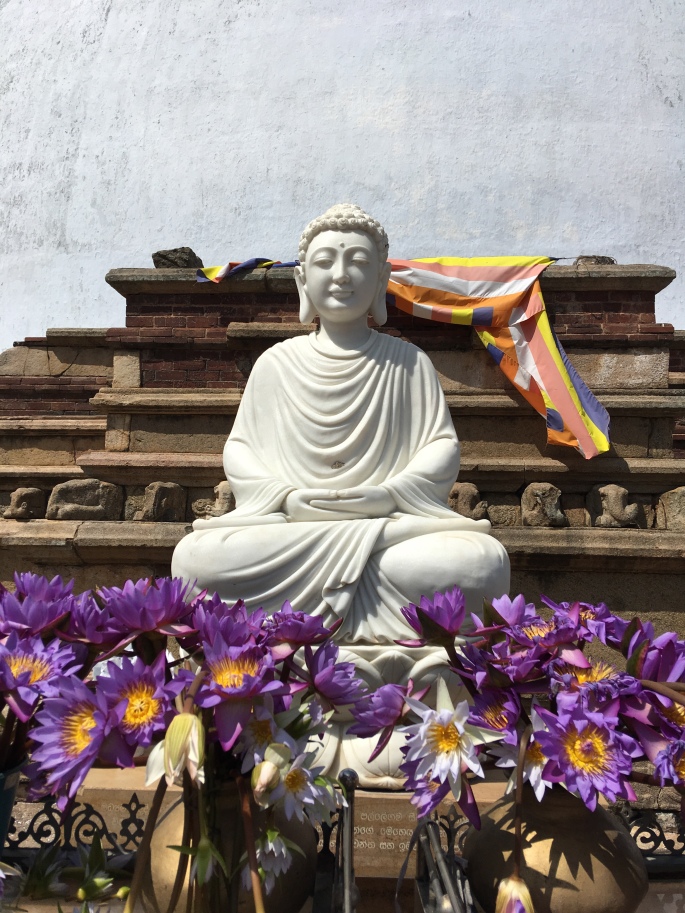 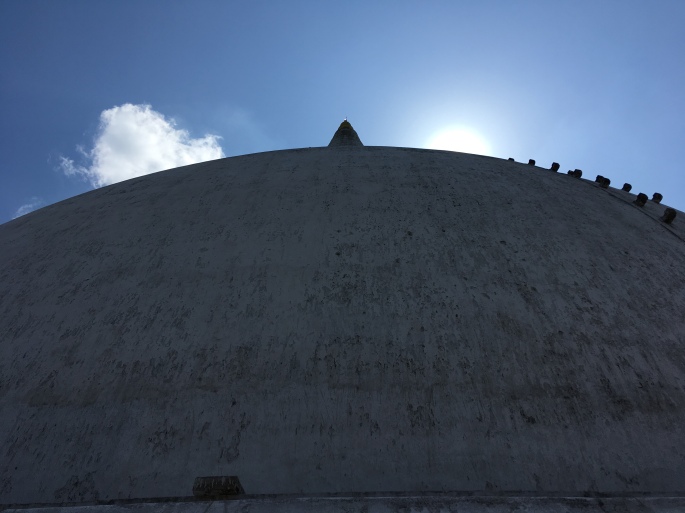 We then grabbed an ice cream to cool ourselves down whilst waiting for the tuktuk driver who had gone off quick to collect his son from school.

He soon reappeared with his son and took us to the next temple which is a enigmatic place…its the oldest Buddhist dagoba on the island and dates to 247BC. Thuparamaya has ancient stone columns around it and a loud speaker playing a haunting Buddhist pray chant which adds to it’s mysticism.

Again, shoes off and a scalding, shade hopping circumambulation around the stupa! 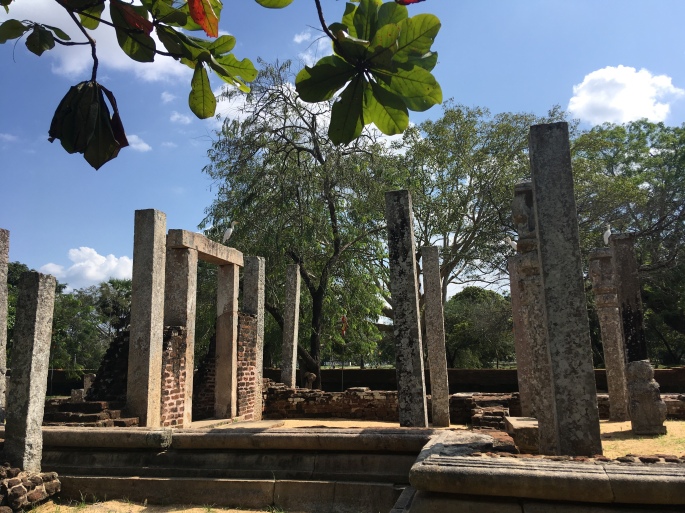 Again, we waited for the tuktuk driver to reappeared as he had taken the opportunity to run his son home whilst we were circumambulating! (I love this word…can you tell?!)

We then popped to Lankarama which besides sounding like a themed night out in Sri Lanka is actually a cute, little stupa that not much is known about.

Next we headed to Abhayagiri Vihāra which is a major Monastery at Anuradhapura, it’s a beautiful brick building with huge, aggressive monkeys…wonderful! Diana was put on monkey duty and in charge of making sure they didn’t attack me! (Bloody hate monkeys, they are still plotting the downfall of mankind…I tell you!) 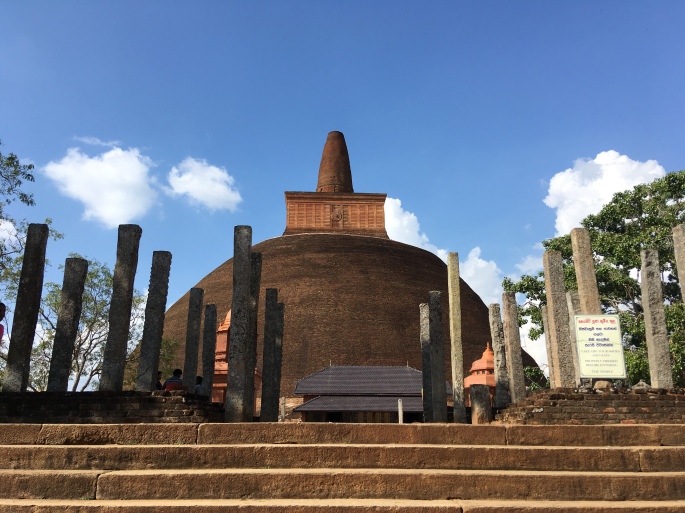 After successfully bypassing the monkey hoards we quickly leapt out the tuktuk to take a look at Monastery dining rooms and dormitories and bathing places. 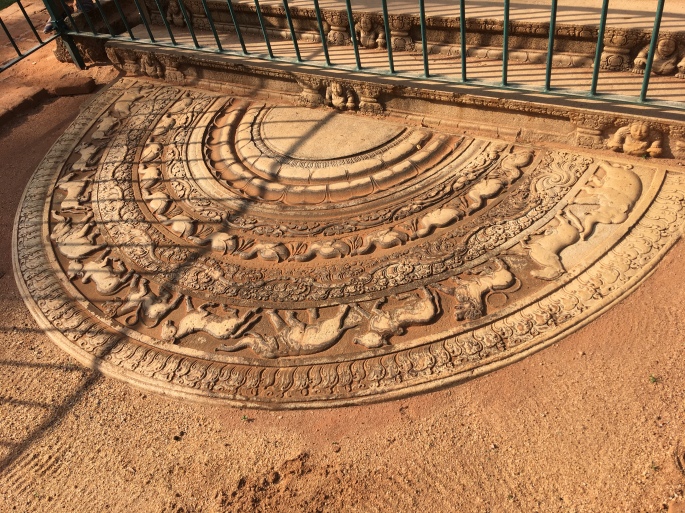 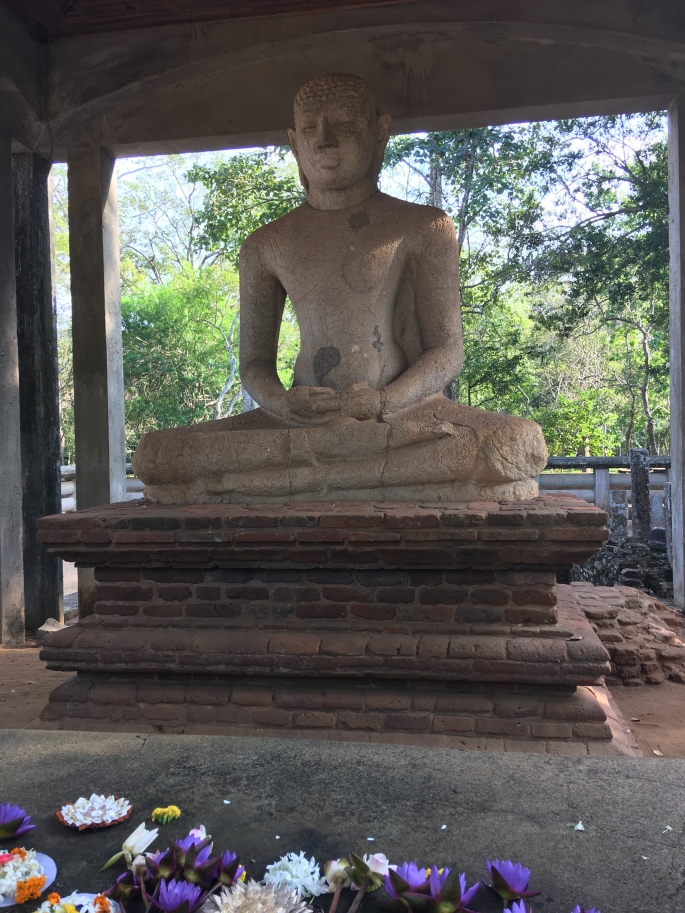 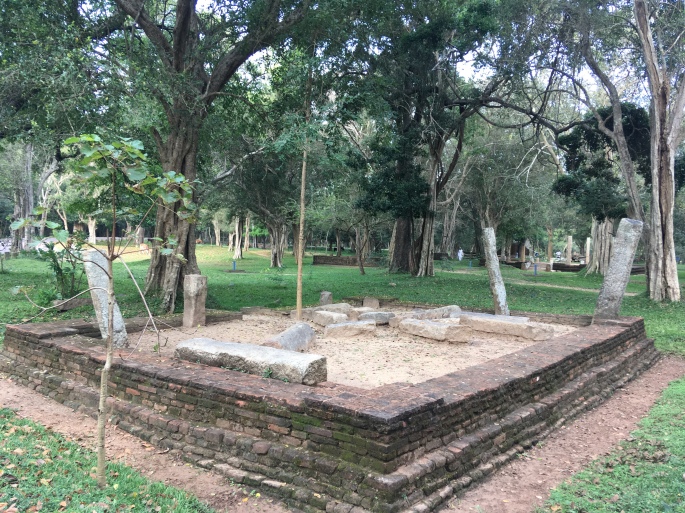 We then headed to Kuttam Pokuna which is one of the best specimens of bathing pools in ancient Sri Lanka. The pair of pools are stunning built where locals can buy popcorn and feed the fish within! 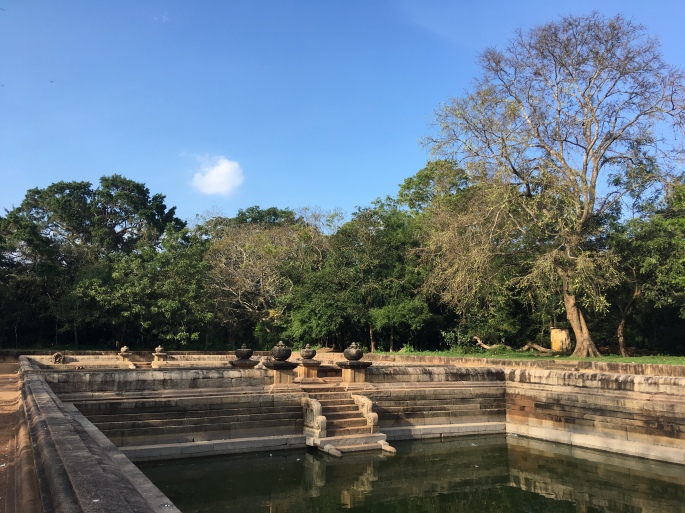 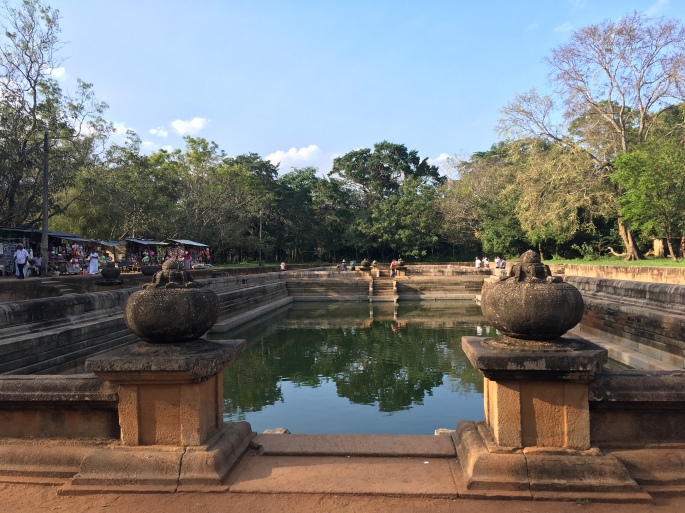 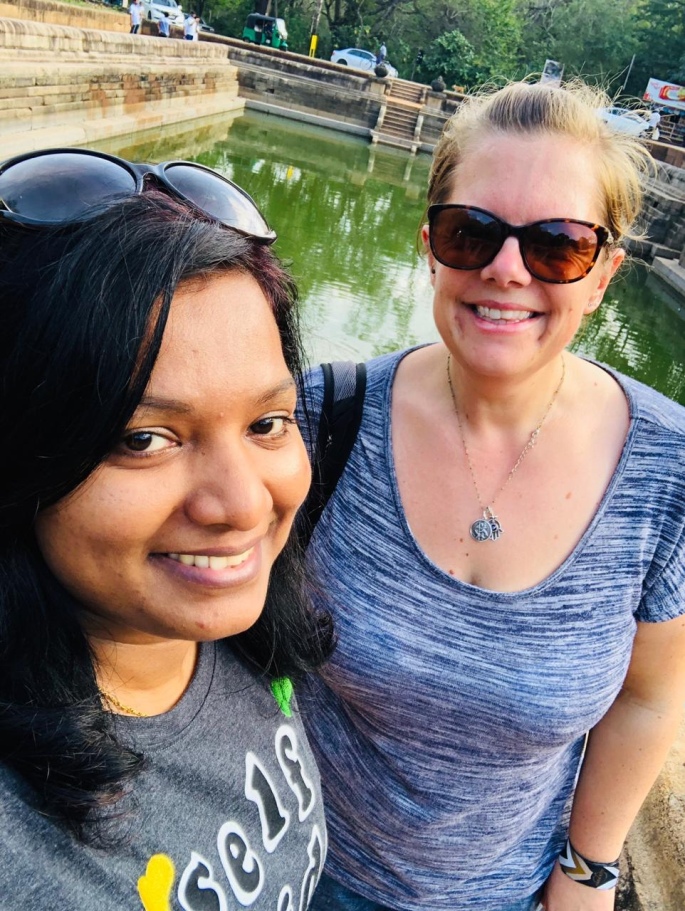 After the pools, which thankfully required no barefoot circumambulatory pilgrimage we headed to the huge Jetavanaramaya stupa which at 122m was the world’s tallest stupa and the third largest structure in the world when it was built. It was the second tallest non-pyramidal building in the ancient world after Pharos the lighthouse of Alexandria. It’s not longer the tallest but it is the largest with a base area of 233,000m2 with 93.3 million bricks used in its construction!

So with that in mind, I decided I was going to pass on the circumambulation pilgrimage because it was just too big to walk/run around barefoot and there were limited shady patches in which to find brief relief from the scalding floor, however, Diana persuaded me we should do it…whilst dodging the bloody monkeys! 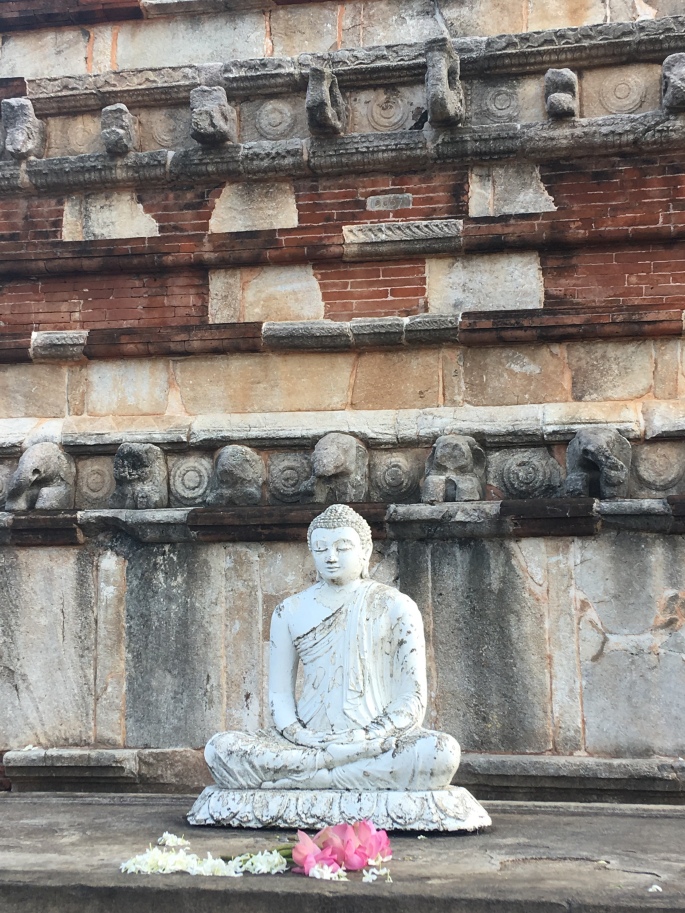 We then headed out of the centre of the ancient city and to the Jaya Sri Maha Bodhi which is a sacred fig tree said to be grown from the southern branch of the historical tree Sri Maha Bodhi at Buddha Gaya in India, where Buddha attained enlightenment.

The seed of the tree was apparently planted in 288BC and the tree is supposed to be the oldest human planted tree in the world. Pretty cool if you ask me….

To reach the tree you must walk a good 10 minutes from the road with a huge crowd of pilgrims attending puja (prayer ceremonies) and you guessed it…barefoot! Although the ground was no longer hot there was now grit and stones to contend with! Jesus….these people must have leather for soles!

We wandered around the temple surrounding the Bodhi tree for a while, watching the pujas before hobbling barefoot in the dark down to the beautiful Ruwanwelisaya Dagaba. We had accidentally coincided our unintentional Buddhist pilgrimage with a huge puja where hundreds if not thousands of Buddhists had come to this temple at sunset to participate in a ceremony. They were all walking together, holding onto a long piece of fabric in the colours of the Buddhist flag which we ended up getting entangled in…not the fabric thankfully but the group of pilgrims walking with it. There were monks, copious amounts of thick incense smoke, chiming bells and flowers. It made the circumambulation (I promise this is the last time I use this…) slow and busy!

Still the ambience was fantastic and the sunset immense.

So after a full afternoon of barefoot, circumambulatory pilgrimage (ok this is the least time….) we had completed the circuit and happily retired to the hotel, shattered but happy! 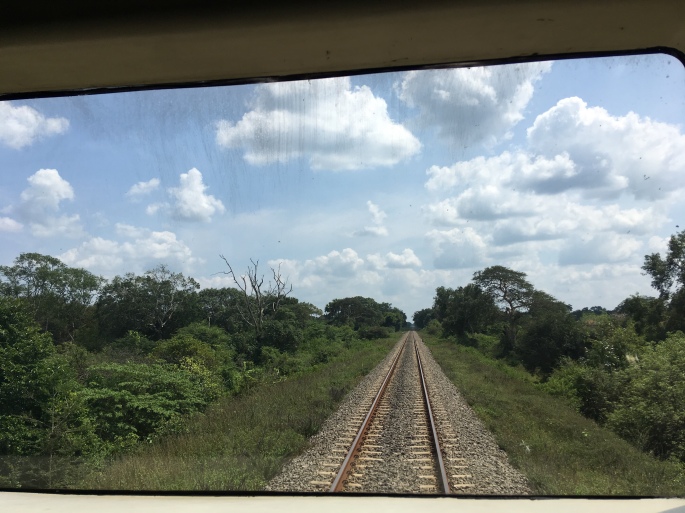 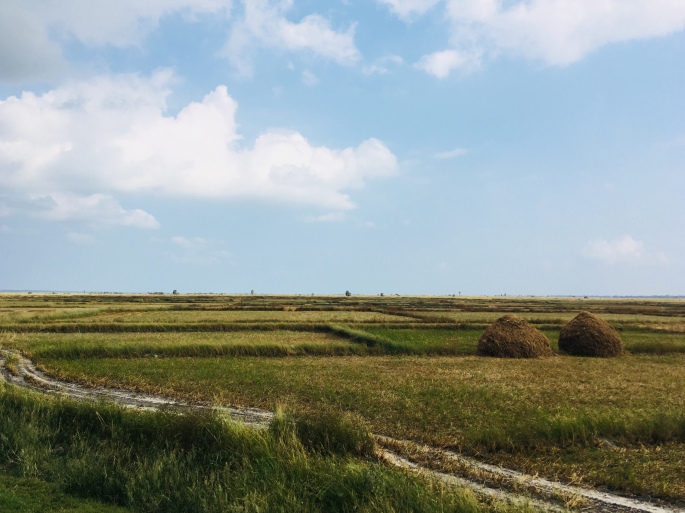 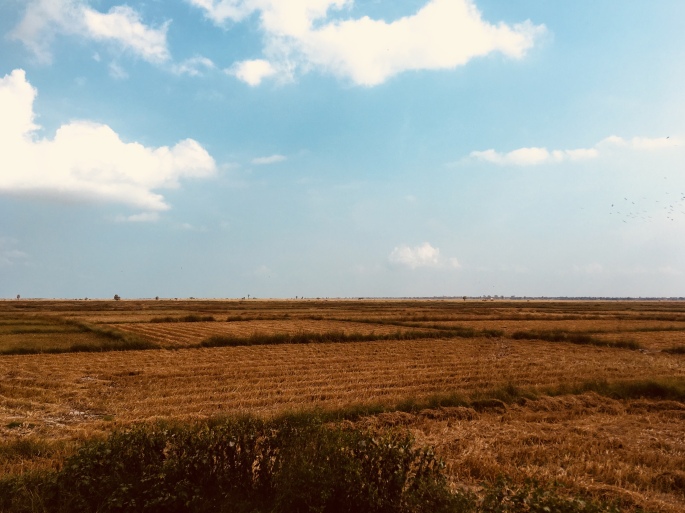 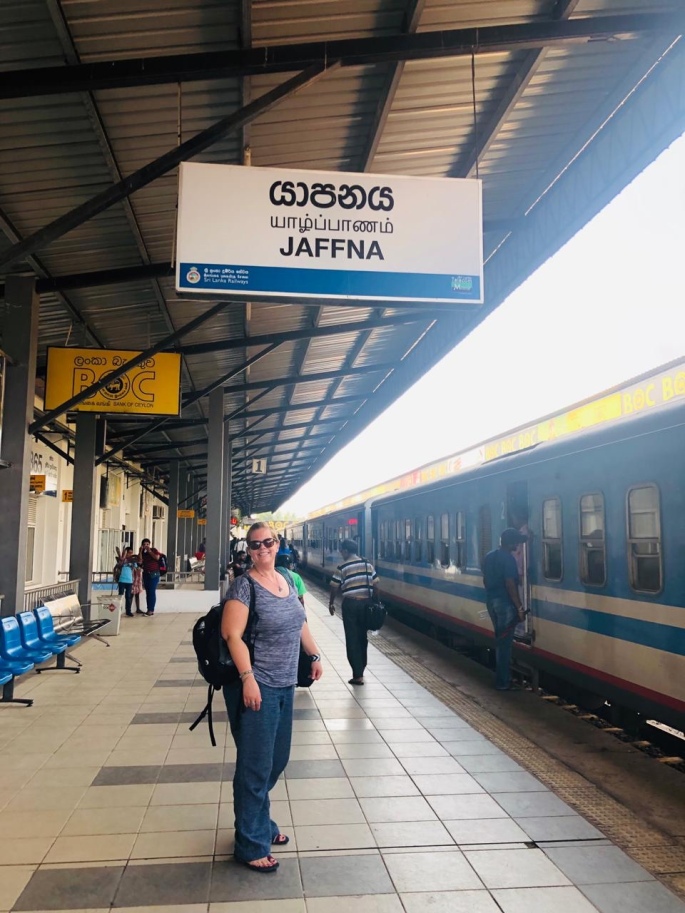 Thankfully our hotel was just outside the station so not too far to walk, we checked in and rested briefly before heading out to see the sunset from Jaffna Fort. 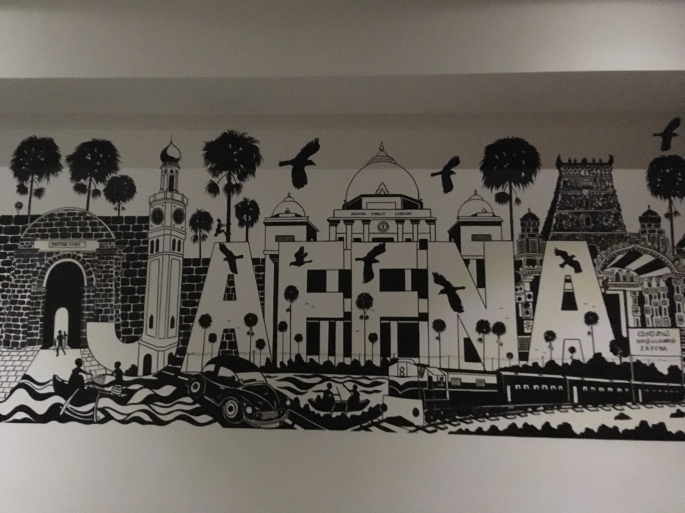 As with everything else this didn’t really go to plan….we found an man in a tuktuk and asked him to drive us to the fort as the sun was starting to set…what should have been a 5 minute drive turned into a 15 minutes when the tuktuk ran out of fuel (apparently…or after Diana haggled the price down he decided to only take us part of the way…we will never know)..so we had to go on foot…we wandered around unsure what direction to go…asked some locals as and got differing directions from them! We started walking and ended up grabbing another tuktuk as the sunset was rapidly disappearing….eventually we made it to the fort with a few minutes to spare before the sun had completely gone down! 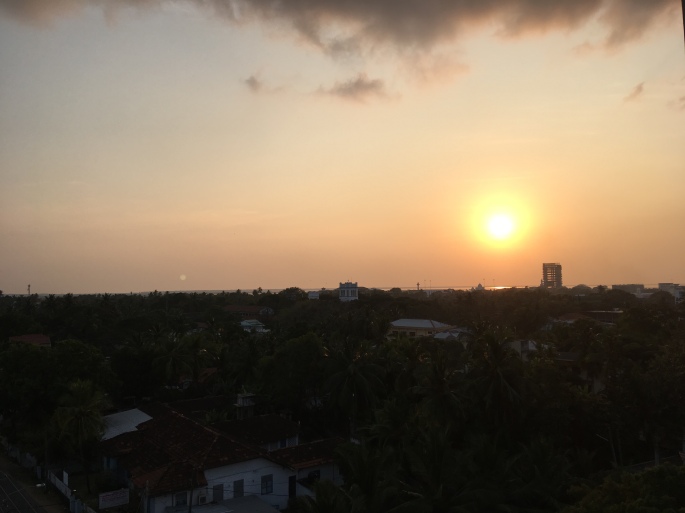 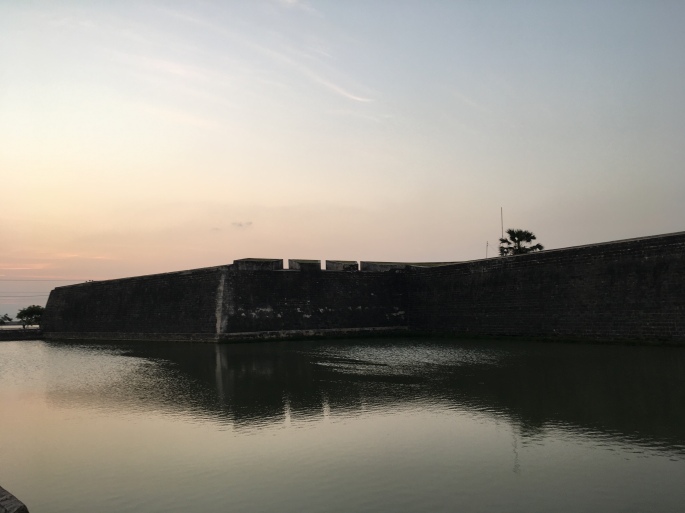 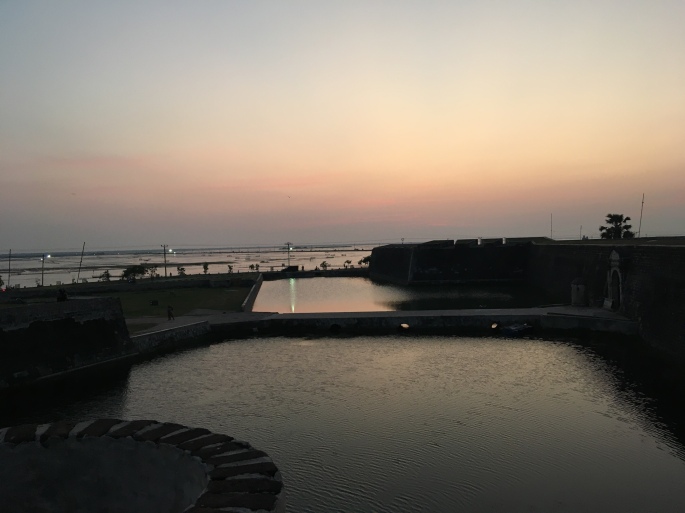 That night we went for the famous biriyani in US restaurant, my veggie one came with devilled cashews in it…immense! 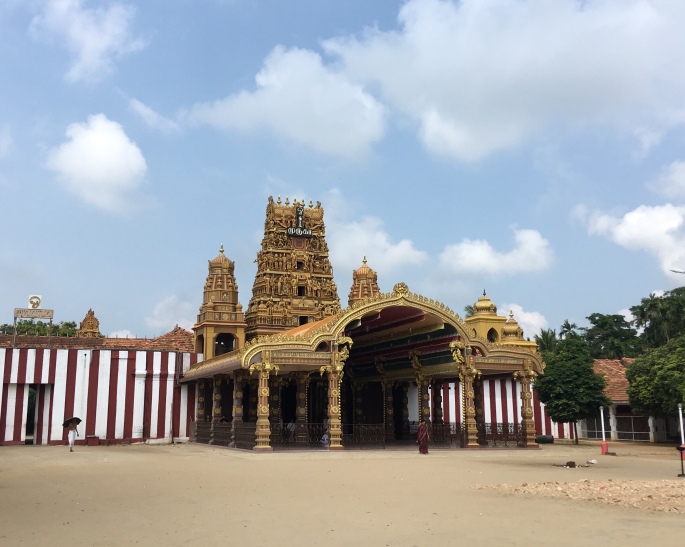 After Nallur we went to Diana’s favourite ice cream parlour…Rio’s. We had a nice ice cream and then wandered to see the cathedral, which was sadly closed.

After the cathedral we popped to Diana’s Aunt’s house to see her cousin and her dog, Dolly. Now Dolly and Diana’s mum normally live in Colombo with Diana, however, her mum was taking some long term rest back in her childhood home of Jaffna and took the dog with her. Subsequently Diana was lonely at home and wanted Dolly back and Dolly was suffering in Jaffna where she was kept in a small cage as opposed to have the whole house at her disposal! So we went to check on Dolly and Diana organised the dog nap of Dolly. Her mum and Aunt were not present as they were at a family event for a few days!

After Diana was briefly reunited with Dolly we headed back to the hotel, had leftovers for lunch and then hit the pool for the afternoon.

In the evening we had to visit Diana’s other Aunt and Uncle and cousins as everyone had got wind that she was in Jaffna and family politics means you can’t not visit! We spent 45 minutes or so showing our faces, chatting about how I get on with the heat and the spicy food whilst snacking and drinking chai.

We then popped to a nearby restaurant called Green Grass for dinner before heading back for a drink and a game of UNO.

The following morning was dog nap day….we checked out, met our driver and van, swung by Diana’s Aunts where she snatched Dolly and we drove off southbound towards Colombo. It was a long 6 hour drive back but at least we were comfortable.

Eventually we reached Colombo and Diana’s house. Dolly settled straight back into her domain whilst I grabbed my rucksack and headed off to my hotel.

I then spent the next few days chilling out on my own during the day and meeting Diana for dinner and UNO at night. I was hoping to see Lcmal my friend in the south but time was against us and it was a struggle for me to get time to get down there and he was unable to come to Colombo. So next time I come back to SL we have agreed that Diana will drive me over to the east coast for a few days and then we can swing by the south and see Lcmal on the way back!

It was a nice, chilled out end to our long dog napping pilgrimage and it was lovely to not only spend time with Diana but re-visit Sri Lanka.

Still all good things come to an end and it was time for me to move on again…onwards to Bangladesh!

You can read all about my 9 days in Bangladesh next time!